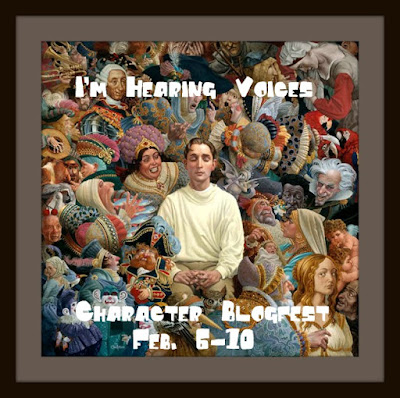 It's day two of the I'm Hearing Voices Blogfest.  Today we "have two characters introduce each other using only dialogue—no backstory, no internalization, just dialogue between the two."  It's such a challenge!  It makes me realize I rely a lot on describing body language and the like.  I am also really tempted to provide backstory right now, but I'll behave.

Emmy: “I’m supposed to give you clothes.  I donate all my old clothes with my social responsibility club, so I don’t have anything smaller. The tops might be too big for you.”
Evangeline: (silence)
Emmy: “Why are you looking at them like that?  What’s wrong with my clothes?  You’d rather wear the shelter donated ones you have on now?”
Evangeline: (silence)
Emmy: “You can talk can’t you?  I know you never went to a real school, but I thought you could at least talk. I know you can’t read.”
Evangeline: “I can read.”
Emmy: “How old are you?”
Evangeline: “12”
Emmy: “When is your birthday?”
Evangeline: “March 15th.”
Emmy: “I was still a freaking baby when you were born.  That’s so gross.  You know, you don’t even look anything like me.  Do you look like her?”
Evangeline: “My mom?  I guess so.”
Emmy: “Did you know my dad?  Did he visit you?  How much? Did you know he had other kids? Did he love her?”
Evangeline: “I don’t know.”
Emmy: “I don’t know to which question?  You know whether or not he visited you.”
Evangeline: “Thank you for the clothes.”
Emmy: “You know, I know what you are.  I can tell.  They’re something evil about you.”
Evangeline: “I’m proud to be a dark witch."
Emmy: “That's sick.  You shouldn't be proud.  God doesn’t love witches.”
Evangeline: “You shouldn’t be proud to be a Mundane.  It just means you’re ordinary.  Pointless.”
Emmy: “Witches don’t get into Heaven.”
Evangeline: “So?”
Emmy: “So?”
Evangeline: “Then you think my mom is in Hell?”
Posted by Sharon Bayliss at 5:00 PM