Is It Getting Hot In Here? Blogfest 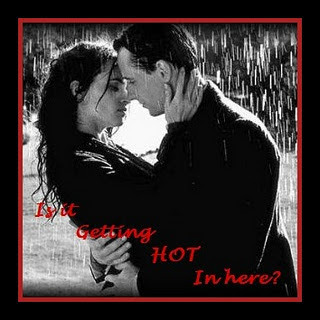 So I have about fifteen minutes until Valentine's Day is over, but I ran across this bloghop and I wanted to play too.  :)  I have a kiss from my WIP, Destruction, an adult contemporary fantasy about dark wizards.  It's far from a first kiss, but it could be a last (spoiler alert...it's not).

Want to learn more about the blogfest, visit Cassie and Hope.  Happy Valentine's Day (or more likely by now, happy Wednesday the 15th)!  I hope you had some steamy non-fiction romance.


“Did you hear my question?” Amanda asked.

“Yeah. That should be fine. I can’t believe she’s already twelve.”

“I know. Soon enough, she’ll be another little Emmy. And God help Carson. He never even liked it when I dated guys in high school.”

Without really knowing why, David reached over and removed the clip from her hair and let it fall around her shoulders. Her hair was light enough that the few strands of gray barely showed, like his own little secret that only he got close enough to see. He combed his fingers through it to smooth it down. It smelled like their bed. Like her pillow.

“Was my hair messed up?” she asked.

She ran he fingers through it self-consciously. “I doubt that. It’s all creased from my clip and unwashed.” She gave him a hard look. “Is something wrong with you? You’re acting like you do when you’re drunk.” She leaned in close to his lips and sniffed. “I didn’t think you’d be drunk on a random Thursday, but who knows what you do when you work from home?”

Talk to lawyers. Plan confessions. Pack bags. He took her face in his hands and kissed her for what he thought would be the last time. He tasted the wine she was drinking and knew it would never taste that sweet right out of the bottle. He sucked the flavor off her lips and inhaled deeply while he kissed her to take in the rest. Her shampoo, her face cream, and the touch of sweat that comes from a Houston commute. He had to store every detail just in case.

When he was finished, she was smiling like she did in their wedding photos. Perfect. Just what he was going for.
Posted by Sharon Bayliss at 11:41 PM