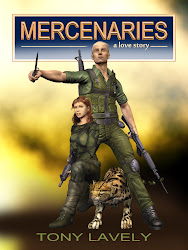 My upcoming debut novel, THE CHARGE, wasn't a solitary achievement. It's been through numerous drafts and three rounds of beta reads. Along the way, I collected an impressive group of critique partners and beta readers and I will be doing a series where I spotlight some of them.

I'm starting at the beginning. Tony Lavely was one of the first beta readers for the THE CHARGE. In fact, at the time it was a very different novel with a different title. But nonetheless, Tony and the others in the first round of betas were critical in helping the novel become what it is today. I met Tony on http://critters.org/, a great place to find betas and critique partners if you're just starting out. He read my manuscript in the fall of 2010 and was the very first beta reader to get back to me with his feedback.

Tony had the insight to pick out the specific line of dialog that was a turning point in the novel, but wasn't believable enough, making the whole plot weaker. It was brilliant and I probably wouldn't have found it on my own. I have re-worked that scene quite a bit since then.

Tony is a Vietnam Era veteran living in Massachusetts and happily married to a wife he met during a tour of duty in Italy. After thirty years as a Manager of Hardware Design, Tony is now retired and has ample time to pursue writing. He is a dedicated pantser and confidently believes that The Muppet Movie is one of the best movies every made. He has several works available on Amazon.com.


Mercenaries is a coming of age thriller that I had the honor to beta read. I found it to be dark, complex, and unpredictable, with bold young protagonists.

At fifteen, Rebecca thought she had everything she needed: Melissa, her best friend, and good grades at school. Then the life she knew was snatched away from both her and her annoying younger brother, Michael. Forced to confront their worst fears, Becky and Mike managed to survive the experience and they both grew a little wiser in the process.

Then, the man who had dragged her and Mike to the edge of sanity wanted her help. The audacity of the young and handsome Ian Jamse, South African mercenary, was unbelievable and his request preposterous. Would she be the bait to lure a child sex-trafficker to justice? What followed was a descent into a world of danger the previously naïve Rebecca had never imagined.

Twelve Words is an anthology of short stories by new, independent authors. Author royalties will be donated to Reading is Fundamental, the nation's largest nonprofit children's literacy organization.

Tony, thank you for offering the support and feedback that I needed so desperately in the beginning stages. It was the positive feedback and constructive suggestions from you and the other betas that inspired me to keep working at it.

Tony blogs at http://tonysmiscellanea.blogspot.com/ and tweets at https://twitter.com/#!/tlavely.
Posted by Sharon Bayliss at 1:42 PM