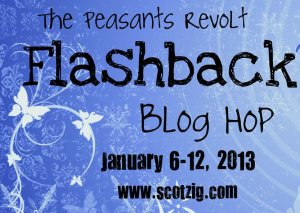 Today I'm participating in Fel Wetzig's Flashback Bloghop! The idea is to bring back a post from a year ago. In January 2012, I was actively trying to find an agent. Fortunately for me, it's been a great year. In April of 2012, I signed a publishing contract with Curiosity Quills Press. I'm very thankful to no longer be writing and re-writing queries. Of course, being on the cusp on publication has it's own challenges! :)

Here is an inspirational post from January 2012 that I wrote, in part, to make myself feel better. Sobering statistics...plus ten shots to get you drunk again

Every once in a while I come across blog posts with "sobering statistics" or the "cold hard truth" about publishing or getting an agent. The bottom line is always this...getting published is really, really, really hard. Whenever I read posts like this, I wonder, why do you feel the need to "sober" me? All serious writers know that getting published is hard, and if they don't know yet, they'll know soon enough.

I got an email from QueryTracker.net that said this, "First off, I would like to thank everyone for a great year. In 2011, QT added 12,036 new members and displayed over 6,300,000 pages. Members are now tracking nearly 250,000 queries, and logged 273 offers of representation. Thank you all for making QT a success, and I hope to add your success story to our list in 2012."

Congratulations QueryTracker! But guess what, I didn't hear anything you just said. All I caught was that 250,000 queries only led to 273 offers of representation. That means that a query's chance of success is just a little better than 1 in a 1000.

If you have the luxury of being a QueryTracker Premium member (and you should be), you can see the spreadsheet of responses for each agent for each query they get. When you see this, you know that it's rough out there. Agents simply don't make many requests.

Feel free to pout for a little while, but then it's time to build yourself back up. You didn't start writing because you thought it was a get-rich-quick scheme. It's tough and you know it. Here are my ideas for how to learn from these statistics and stay motivated. Hopefully by the end you'll be nice and tipsy again.

Despite hours spent pouring over agent blogs and interviews, I have learned one thing. I still can't predict which agents will like my query. The ones I think will love it don't, and the ones I almost didn't query do. I'm not saying that you shouldn't do your agent research, just don't assume you can predict their responses. Query in batches so you can fix problems you discover in the querying process before you hit the whole agent list, but if you feel like your query and story are at their best, don't be afraid to cast a wide net.


2) Write more than one project

In the time I've been a serious writer, I've actually gotten more requests resulting from contest wins than queries. Yes, it's easier to win a contest than get picked out of the slush. This may be because contests have limited entries and the agent almost always picks a few winners and runners-up, so your odds are better. But whatever reason it's happening, just do it. Enter blog contests. They're free. They're awesome. Nothing to lose. Of course, conferences are also well known for being a good way to stand out....but they're far from free.

This is a no-brainer, but the statistic above drives this home for me even more. You have to have a great query, premise, writing, everything. If you're missing any part, you're not likely to get representation. Keep on re-writing until you can't think of anyway to make it better (within reason...I'm not sure I'll ever reach this point with anything). Research pet peeves and what makes a "tough sell" then don't do it...even if you think it's a stupid rule. Debut writers can't get away with much. When you're rich and famous, then you can break all the rules. :)

Another cool thing about QueryTracker.net Premium membership is that you can see how an agent changes their responses throughout their career. What they say is true, new agents really do make more requests, a lot more.

I know I contradict myself a little bit here. Yes, you should write more than one project and query widely to increase your odds, but queries aren't like tickets in a lottery...at least not tickets with equal value. You can send out a bad query to a hundred agents and get no response or you can send an amazing query to ten agents and get ten responses (in theory anyway, I'd be surprised if any writer bats 1000). So try not to worry too much about the odds and spend your time finding ways to stand out from the crowd.


7) A rejection doesn't equal "you suck"

This may be an insanely positive way of looking at it, but since so few queries get a response, you can't assume that your book is bad just because it's not getting any requests. It's just hasn't blown anybody out of the water. Imagine if you were an agent, would you want to champion a book that was "okay" or even "good"? No, you'd want it to keep you up at night with it's awesomeness. So, you may not be a bad writer, you might even be really good, just not awesome yet. The moral of this story is that rejections don't mean you should give up, it means you should get better and try again.


8) Be inspired by the impossible

Maybe this is just me...but sometimes thinking about fighting against impossible odds makes me feel great. It makes me feel like I'm doing something worthwhile, something heroic. I'm proud that I'll never regret not having tried. This year, I couldn't think of any good New Year's Resolutions because I already give my dream my 110%.

This is probably the most difficult of all the "shots" because it requires lots of hard work with little reward, but the truth is, if you keep working hard you will keep getting better. Increase your odds by simply being a maniac about your goals. Stand above the others who give up after they fail. Instead of thinking about the odds of a single project, I will think about my overall goal of getting a novel published. I've only been a serious writer for about two and a half years (and I had a baby in that time, so I give myself a handicap), and I've come a long way. I think about how far I'll go if I keep trying for three more years, or five, or ten, or the rest of my life (although please God, let it happen faster than that). When I consider that I won't ever give up, the idea of never getting published at all seems almost...dare I say...unlikely.

Writing isn't rational. Period. It's hard to get published, and even if you do, odds are you won't become J.K Rowling (or even be able to quit your day job). Despite your day dreams, you know this. No one writes a novel because it's rational. So don't worry if it's not. Be irrational. Be a writer.


I hope you're feeling nice and toasty again. If you want more inspiration, check out my past inspirational posts:


Be more like your characters
Love conquers genre confusion


What helps you stay motivated despite bad odds?