I am very honored to be the first to share some very good news. The Haunted Writing Clinic and Contest from last October has a success story! 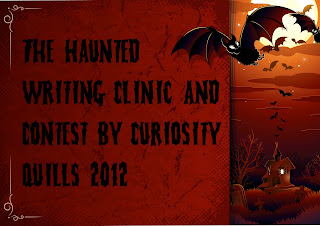 Congratulations to Yolanda Renee who recently signed a contract with Curiosity Quills Press!

In November, Yolanda was selected as a winner and acquisitions editor Andrew Buckley made a full request for Memories of Murder. In late January, Andrew offered a publishing contract for Memories of Murder AND a contract to re-release her first self-published novel, Murder, Madness, & Love. She recently signed both contracts and is now officially a part of the Curiosity Quills family.

I am so thrilled to have been a part of her success story. Also, thank you and to the super villains and criminal masterminds who helped with the contest!!

Murder, Madness & Love and Memories of Murder are the first two books in a three book series, Mystery / Romance / Suspense. The story is set in Anchorage, Alaska, and Seattle, Washington, the protagonist is Detective Steven Quaid. Caught in the web of a black widow spider in Murder, Madness & Love, he comes up against an extraordinary foe, Lucifer, in Memories of Murder. Detective Quaid solves the mystery / brings the evildoer to justice, and saves the damsel in distress, unless she saves herself first!

A message from Yolanda:

Thank you so much for sponsoring that Clinic. I had massive doubts about my chances the entire way through. I didn’t think my Query was good enough, and while I believed in my book, writing a query and posting the first page were daunting. But the announcement that I won was amazing and then the offer of a contract, and not one, but two were, well, beyond words. When Andrew wrote that he didn’t usually read my genre, but liked my story, wow, so unexpected, it sent me over the moon!

Connect with the newest marauder here: