The Charge is available!

I've been trying to wait until the morning to spread the word...because I know no one is up to read this...but I can wait any longer! Everyone can read it tomorrow while I'm sleeping off my book release high. :)

The Charge is now available to purchase! In the acknowledgements in the back of the book, I talk a little bit about how thankful I am for the online writing community. I expect my family and friends to support me, but having virtual strangers from across the world step forward to help me is awe-inspiring. Thank you to everyone who has commented on this blog, participated in a blogfest, and connected with me in any other way on my publishing journey.

And without further ado, I present The Charge. 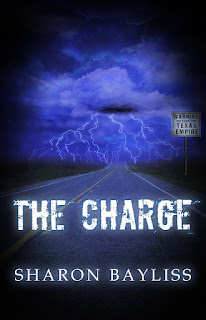 Praise for The Charge, by Sharon Bayliss:

"A solid cast of well-developed characters, including a "super-tall" royal Texan family, stars in this thrill ride of a novel teetering between sci-fi adventure and alternate historical epic." ~Publishers Weekly Review (won in the 2012 Amazon Breakthrough Novel Award Competition)

When King of the Texas Empire kidnaps Warren's brother, Warren embarks into a still Wild West to save him. On his journey, he makes a discovery that changes his life forever--he and his brother are long-lost members of the Texas royal family and the King wants them both dead.

He gets help from an activist Texan named Lena, who's itching to take on the King and happens to be a beautiful firecracker Warren can't stay away from. Convincing her he's not one of the bad guys becomes harder when a mysterious energy stirs in his body, turning his brain into a hive of emotions and memories--not all his own.

A legacy of violence is not all he inherited from the brutal Kings of Texas. The myth that the royal family possesses supernatural powers may not be myth at all.

Gone are the days when choosing a major was a big deal. Now Warren must save his brother and choose whether or not to be King, follow a King, or die before he can retire his fake ID.

And while you're here, why don't you enter the contest!


a Rafflecopter giveaway
Posted by Sharon Bayliss at 5:22 AM