Interview with Tez from Heaven's Core 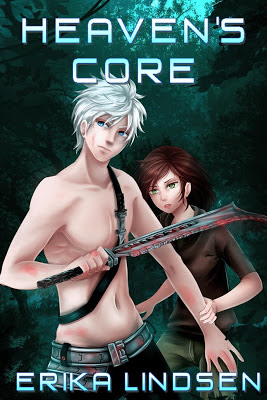 Have you ever wondered what it would be like to live on the outside world? Away from civilaztion? Well today I am interviewing the star of my new release Heaven’s Core. Please welcome Tez!

E: So, first things first, aliens have come to Earth. What was your initial reaction to that?

T: I was only nine when they came, but like any kid, I was curious. I world seemed to stop moving while the spaceships landed. I wondered if they would be friendly or if they wanted to make slaves of us.

E: And, ten years later, humans and aliens are at peace, working together to cure diseases and make Earth the best it can be.

T: I guess you can say that.

E: Well, what are your feelings about that?

T: I’m a Rebel and Rebels don’t believe in alien to human interaction.

E: So you want them to leave?

T: Can we change the subject?

E: Sure. Now in the book you meet Hannibal. Why, when he was on the run and bleeding, did you offer to help a known Rebel killer?

T: I like to help anyone. He was injured.

E: One last question then I’ll let you get back to your duties. Are you in love?

T: I’d hope you’d want your readers to find out by, well, reading.

E: Very true. Thank you, Tez, for stopping by with me. And to Miss Bayliss’ readers, by commenting you will be entered into the contest to win a print copy of Heaven’s Core, plus some other really cool grand prizes.

Go check it out!

When lives are decided by the end of the blade, what happens when it’s forever sheathed?

Ten years ago, aliens made contact with Earth, offering technology and cures for diseases in exchange for water. The world watched as peace was made, seventy billion miles brought together.

But not all felt this union was a good thing. On both alien and human sides, Rebels opposed the treaty and some would do anything to break up this intergalactic bond. Earth had an answer to those who threatened it: the Core, a group of mercenaries that dealt with Rebels by any means necessary.

As a cyborg and member of the Core for three years, Hannibal is good at what he does. But the bodies he’s piled up are starting to weigh heavily on his shoulders and he knows what the Core does isn’t justice, but murder.

Hannibal escapes the Core headquarters in search of his own peace. While on the run, he’s injured but is taken in by a Tez. Problem is, she is beautiful, vivacious, and a Rebel, his sworn enemy. Hannibal’s training has taught him to kill her on sight. He finds his duties get much harder with each passing day. But if he doesn’t do the job, there’s a long list of colleagues that will.

Kobo
Posted by Sharon Bayliss at 10:08 AM