Happy Re-Release Day for EVER by Jessa Russo #EVERtrilogy 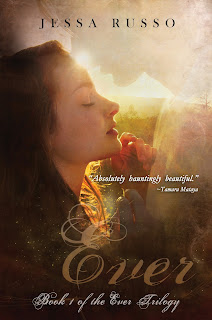 To celebrate EVER's rebirth, and Jessa Russo’s first step into the indie self-publishing world, she is giving you the first chapter of EVER for FREE! Yup! FREE! You can read along, decide if you want more, then click on one of the buy links below to grab a copy for yourself! *Paperbacks available soon!

The winner(s) will receive the following items:

INTERNATIONAL Prize Pack (ONE winner):
E-book of EVER by Jessa Russo (YA)
Complete set* of The Darkness Falls Trilogy e-books from Krystal Wade (YA)
*Includes WILDE'S FIRE, WILDE'S ARMY and WILDE'S MEADOW
E-book of THE CHARGE by Sharon Bayliss (YA)
E-book of BROKEN FOREST by Eliza Tilton (YA)
E-book of THE VALENTINE CHALLENGE by Marisa Cleveland (A, mature content)
E-book of THE GATHERING DARKNESS by Lisa Collicutt (YA)
E-book of 1,000 SLEEPLESS NIGHTS by Connie Michael

We're also going to be tweeting a bit today, to celebrate not just EVER's re-release (hashtag: #EVERTrilogy), but also playing up a major theme of the book--Ever's love for her deceased best friend. We'll be tweeting the theme with the hashtag #IfICouldBringBack and then sharing who we would bring back and why, or what we'd do with them, etc.

So, sticking with EVER as my example, the main female character of the series may tweet something like this:

#IfICouldBringBack Frankie, I'd finally tell him the truth. That I've loved him since we were in diapers. #EVERTrilogy

Who would you want to bring back? An old flame? A relative? Maybe a famous author or dignitary? Think about it and join in the fun on Sunday, 9/1/13! We'll see you on Twitter!

EVER
The EVER Trilogy, Book One
By Jessa Russo
September 1, 2013 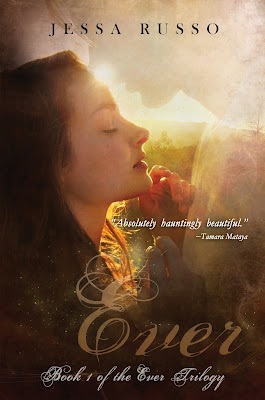 Seventeen-year-old Ever’s love life has been on hold for the past two years. She’s secretly in love with her best friend Frankie, and he’s completely oblivious. Of course, it doesn't help that he’s dead, and waking up to his ghost every day has made moving on nearly impossible.

Frustrated and desperate for something real, Ever finds herself falling for her hot new neighbor Toby. His relaxed confidence is irresistible, and not just Ever knows it. But falling for Toby comes with a price that throws Ever’s life into a whirlwind of chaos and drama. More than hearts are on the line, and more than Ever will suffer.

Stay tuned for the second book in the trilogy, EVADE, set to release on October 1st, 2013!
You can now add EVADE on Goodreads!