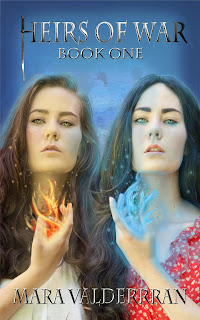 Today I am pleased to welcome Mara Valderran, author of the new adult fantasy, Heirs of War -- released on 9/13!

Seventeen-year-old Zelene doesn't believe in magic or prophecies. When she's told she is part of the prophecy foretelling five powerful girls bringing peace to the war-torn worlds, she scoffs. The idea of other dimensions layered on top of the world she lives in is almost as ludicrous as the idea that she might be able to save them. After she is attacked by magic-wielding assassins, she finds she can't argue with reality.

As their enemies strike, the girls are taken back to their world and discover the ties binding them together. Rhaya has always had an uncanny knack for reading people, but can’t seem to unravel the mystery tying her to Isauria, the new friend she bonded with instantly. For years, Isauria has been dreaming of Terrena, a girl living her life on the run in a magical world ripped apart by the tragedies of war, completely unaware that she is psychically linked to the world she was born in.

Zelene views them all with a distrustful eye, familial bonds or no, and can think of a place or two she’d like to shove the crown she supposedly inherited. When she learns that her long-lost twin Ariana has been captured by the rebels, Zelene’s attitude changes. She doesn’t know how she is supposed to go against an army of magic-wielding rebels when her own ability to manipulate the elements is still locked within her. But can she trust the elders to rescue Ariana when it seems their medieval politics are what brought about the war in the first place? With all that is at stake, the answer becomes clear to Zelene.

Screw the worlds. She’s getting her sister back.

World building is a huge part of fantasy. As a writer, we want to have a clear image of what our world looks like. What kind of government rules over it, what kind of society our characters will be in. These issues are very important for building the story and discovering the conflicts the characters will face along the way.

But it’s very easy to get bogged down in the details. When I first started creating the world for Heirs of War, I wanted everything to be completely unique and make total sense. This was especially true for creating my magic system. Harry Potter was huge at the time, so I knew I wanted to stay away from wands. Gandalf already tapped the bad-assery of the staff, so that was out. And although I was fascinated by the Additive and Subtractive magic system Terry Goodkind created, I knew that wasn’t what I was aiming for either. I toyed with the idea of using physics in some way, but that became too complicated really fast.

Then I had a brilliant revelation. Gaelic! I would use the Gaelic language for all my magic. I dove into research, trying to find every book and website I could on how to speak Gaelic. I was brilliant! No one had thought of this before! Because, ya know, no one knows about the Gaelic language. Right?

Wrong. I shared my idea with a friend who has played the role of sounding board since the creation of this story. She also happens to be a voracious reader.  She nodded and said that was great and reminded her of this other series where they used Gaelic for spells.

She and I had a nice chat at that point. She helped me discover something very important: Coming up with a unique idea that no one else has used in any way is near impossible. And also, it’s not that important. She helped me to see that what is important is the story.

So I decided to keep it simple. I based my magic system on what is around the characters: Nature. I had already decided early on that each girl would represent a different point on the pentacle, so it made sense to use the elements they represent for magic.

Earth, Air, Fire, and Water each have their own unique gifts. Our bodies represent our ties to Earth, so Earth magic is healing magic. But the use of Earth magic can also be used against people, not just for healing. If the wielder is powerful enough, arms can be broken, or Earth can be used alongside Fire to cause terrible burns in a matter of seconds. But the magic they wield isn’t endless. The top point on the pentacle represents Spirit, our connection to the elements. What does this mean? It takes a toll on the wielder. They can’t just sit there for hours and hours pelting lightning bolts at people. I think of it a lot like a work out. They are using their magic muscles to wield the elements, but after a time they are going to run out of energy and those muscles are going to become too fatigued to work.

So what are you favorite magic systems? Do you prefer complex or simple magic in your fantasy stories? 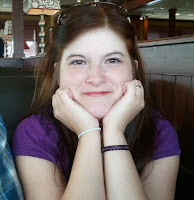 Mara Valderran has been coming up with stories pretty almost since she could talk, often commandeering her brother's G.I. Joes to play out her fictional tales alongside her Barbies. Once she hit adolescence and realized playing with dolls wasn't cool anymore, she started putting her ideas to paper. And she hasn’t stopped since.

Mara is more than just a madwoman with a writing box. She lives in the south with her husband and demanding cat. She hopes to one day meet Daniel Jackson from SG1, or at least the actor who played him. When she’s not writing, you can find her reading, playing video games, or spending time at her favorite local coffee shop.