Review of COPIED by S.M. Anderson 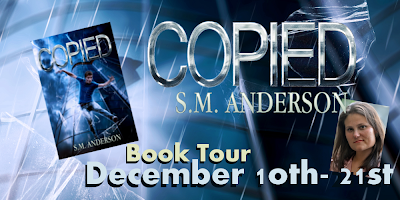 I was excited about this book. It's a sci-fi YA with a genetically engineered male lead, just like The Charge! And, Copied, didn't let me down. It was exciting and interesting at the same time, with memorable characters. 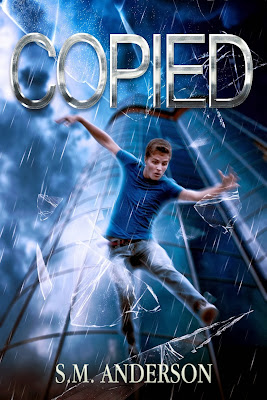 When Xan is framed for starting a fire that seriously injures his best friend, he loses all his old friends, and instead gravitates towards the uber-smart, Lacey, believing that she may have answers. Together they investigate the arson to find the true culprit. What they find surprises both of them. Xan did start the fire...or someone who looks exactly like Xan.

Xan's parents admit that he was adopted off the black market, and that he may have been part of a multiple birth. Xan and Lacey learn that the truth is not that simple. Xan is a clone, and another clone, Beta 23, has been sent to kill him.

In this book, I especially enjoyed the relationships between Xan, Lacey, and Beta 23. Lacey is a fantastic female lead. She's smart and far from cliche. Also, about halfway through the book, we delve deeper into Beta 23's character, and see him struggling on the edge of humanity. Somewhat robotic and flat at the beginning, Beta 23 ends up becoming the most interesting character in the book.

Although fast-paced and exciting, the book covers lots of interesting issues related to genetic engineering, and nature vs. nurture, and the definition of humanity. And if her science wasn't accurate, it certainly fooled me! :)

This is the type of novel that can be enjoyed by young people and adults alike. Since it features a male lead, this is one of the rarer YA books that would be a good pick for a boy. Also, the story is clean--no profanity, no sex, and limited violence--so, you can feel comfortable recommending it to almost anyone.

Check out the trailer...

Destruction is coming on April 14, 2014 from Curiosity Quills Press.

David and his family plus Samantha stood in a circle around a small pile of unlit firewood in the backyard. They stood arranged by age; David, Amanda, Jude, Patrick, Xavier, Samantha, Emmy, Evangeline, and then of course, David again, all twice as thick with jackets and scarves. The air felt hard with cold, a cold that seeped in through their layers with ease. They held candles…but no matches…in their gloved hands. The family had gone through the house turning off lights. And that meant all of them. They even turned off the red lights glowing on electronics. They had unplugged the entire house. However, David could see easily. An orange haze of light peeked up from the trees. Millions of lights lit up the world all around them. Darkness didn't exist in the middle of Houston.
As soon as they had managed to arrange themselves into a circle, the kids got quiet without David or Amanda instructing them to. Wizards standing in a circle felt significant to David. When they got in that position, they snapped into place. The air became denser around him and he rooted to the spot, as if with extra gravity. But he didn't feel confined. He felt powerful. He plugged into an energy source he didn't even know existed. His fingers had an itchy, tingly feeling. He knew he could do magic.
The paper in Amanda's hand crinkled loudly as she held it close to her face. She had done her research, which David found endearing and impressive, since one couldn't exactly learn how to cast spells on Wikipedia. She had talked to the kids and talked to some of the witches Penelope's mom knew, and had created a ritual designed specifically for them. The matriarch of the family always directs spell casting. She's supposed to understand her family's magic, the purpose of each family member, and knows how to keep them in balance, a tall order, especially since she didn't know much about some of the newest members of her family and knew even less about magic. But, he had never known Amanda to say she couldn't do anything, so why start now?
Amanda owning this task shocked the kids, but not David. He knew her better than anyone did. Thus, he knew her mind and the rest of her often disagreed. Her left brain dug her feet into the ground and wouldn't budge. That part of her would say things like, "We're not practicing magic," and "We're divorced," until kingdom come. She would say it. She'd believe it. And she'd do the opposite, because occasionally the parts of her not governed by her left brain would break free. And because David had now learned that wizards stayed wizards, no matter how many years they'd been indoctrinated otherwise. They listened to forces that had nothing to do with logic or reason, making them stupid, reckless, destructive, and exciting. And they liked to play with fire. Literally and figuratively.
"How I am supposed to read this in the dark?" Amanda asked. "How do people do this?"
"You're supposed to have it memorized," Evangeline said.
"Your eyesight is terrible," David said. "Let me see it."
She thrust the paper out of his reach. "Back off."
"Why don't you just let Evangeline or Samantha speak? David said. "I'm sure they have some stuff memorized."
"No," Amanda said. "It's supposed to be me. My words." Amanda let out a shivery sigh. "I'm sorry. I know I'm not supposed to do this." She took her phone out of her pocket and turned it back on. She illuminated her paper with the dim blue light.
"First we honor the darkness,
For in darkness our eyes are not distracted by the flash and flair of mundane sights
So only in darkness can we truly see.
In the silence of the deepest night, our ears are not assaulted by mundane sounds
So only in darkness can we truly hear.
In darkness, we are unable to see danger and are rendered vulnerable
So only in darkness can we truly feel.
We do not believe that light exists in spite of darkness. We believe that light exists because of it.
Darkness is the only fertile ground for light. It is the only garden where light can be sown.
So now we experience the darkness. Use this time in the dark and quiet to use your deeper senses. Experience what you are called to experience. The answers wait for you in the darkness. Do not deny them."
And then they fell silent. David couldn't hear the cars on the highway anymore. He couldn't hear the music playing down the street. He could hear only the breathing of the others in the circle. And the sky…the orange haze disappeared and the sky looked like the one over Big Bend. Millions of stars set against a perfect pitch black. The moon cast a crisp, blue light upon them. With her words, or perhaps with some other magic deeper than words, she had called the darkness to them. David pictured it as a bubble around them.
The quiet didn't feel awkward as David would have expected. No one giggled or even coughed or sighed. His lungs felt larger. He could breathe. This darkness didn't feel frightening. In fact, David couldn't remember ever feeling so safe. The darkness was the foundation that everything else was built on. The garden where the universe grew. The simplest, most basic thing in existence. And it was spectacular.


He supposed that was the answer that waited for him. That darkness in itself was not evil. Darkness was peace. Potential. Home.
Posted by Sharon Bayliss at 12:31 PM 5 comments: 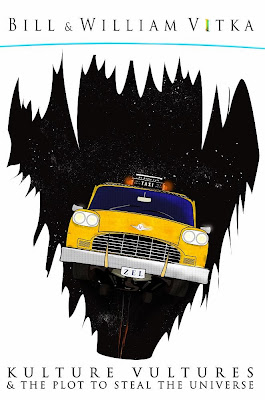 Kulture Vultures is about a couple of aliens traveling around in a spaceship shaped like an old taxi cab to resurrect dead pulp heroes and scientists. Their goal: save Earth form the Combine, an evil mega-corporation that wishes to eliminate all the pulp media in the Universe.

That should be all you have to hear to know that Kulture Vultures is quirky, unique, irreverent, and clever sci-fi. This isn't bottled, dime-a-dozen fiction, and it's way too cool to want you to read it. Kulture Vultures is funny, entertaining, weird, and sometimes gross, but it's also more than that. The story celebrates and honors human culture, independent media, and free speech. If you love pulp fiction or you're looking for something that steps outside the normal, this is definitely for you.

P.S. Kulture Vultures is only 99 cents today and tomorrow! 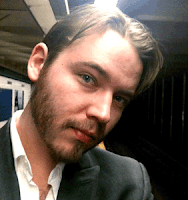 William Vitka is a journalist and author and native New Yorker/Pennsylvanian. He’s written for CBSNews.com, Stuff Magazine, GameSpy, On Spec Magazine and The Red Penny Papers to name a few.

His debut novel, INFECTED, was published, kicking and screaming and bloody, in late 2012. His anthology of short stories, THE SPACE WHISKEY DEATH CHRONICLES, was published at the crack of 2013 by Curiosity Quills. EMERGENCE, a prequel to INFECTED, will knock your socks off. His latest book is the alien invasion tale STRANDED.

Find him online at:

It's time to stock your Kindle! Many Curiosity Quills titles including The Charge, Primetime, and lots more are only 99 cents on 12/2 & 12/3!

I've taken the time to select a few titles that I think deserve more attention! For only 99 cents, there is no excuse not to take a chance on something new. You might just find a new favorite. Remember to leave a review after you read!