I'm taking part in Ruth Snyder's Blog Hop for Writers and this week's post is advice to beginning writers.

I really could just write three words here and be done with it....

I know what you're thinking. "Okay, yeah, obviously. That's not useful advice. I KNOW that."

And, if you're like I was at the beginning, yeah, you do know that. Most writers understand that becoming an author is difficult. You'll face rejection. You'll struggle. Unless you're very delusional, you certainly don't think that writing is a "get rich quick scheme". It's more of a "get poor slowly" kind of a thing.

But, I still see too many writers giving up at different phases of the game. And, often, it's writers with real talent. The only good reason for giving up is if you don't enjoy writing. If so, why were you doing it in the first place? But, if like most writers, you love writing, then don't stop. Ever.

I think that writers know it's going to be tough, but I for one probably didn't understand exactly how tough it would be. And, that's not just while you're in query hell. Writing is hard after you signed with an agent or publisher. It's hard after you're published. It's hard after you become a bestseller (I assume :).) Most authors face a lot of setbacks. This is NORMAL. If writing and publishing is a roller coaster of emotions, then you're doing it right. And, if you really want to be an author, you can't let these bumps stop you, at any point.

One thing to remember, there is a difference between giving up and changing your strategy. Yes, some projects and paths need to be abandoned. But, if you keep working at it, you'll keep learning, and keep getting better. So yeah, once again...DON'T GIVE UP.

Destruction is coming soon! Please sign up here to help with the blog tour and cover reveal. 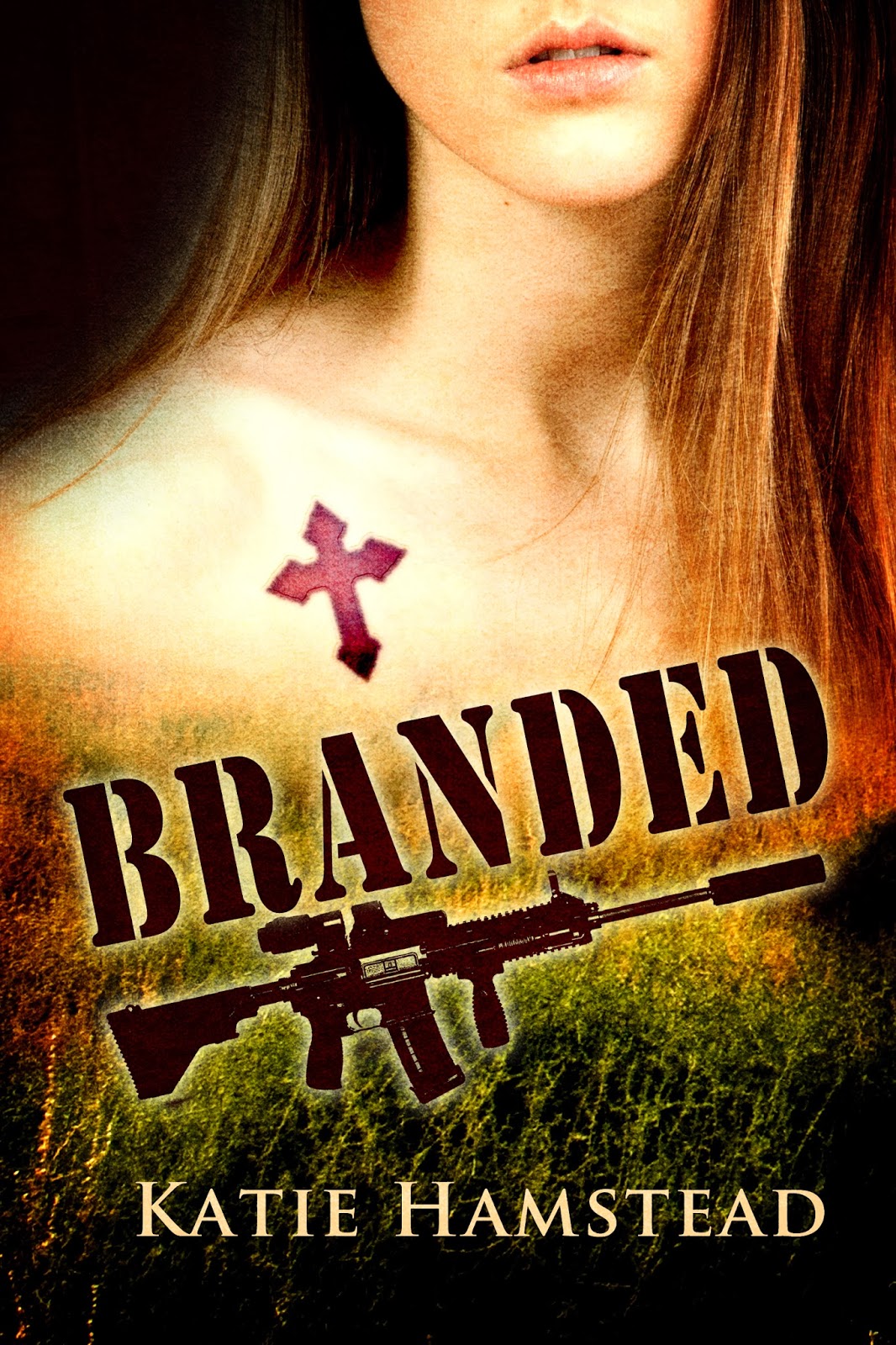 I am pleased to present Branded, a new Christian-themed thriller from Katie Hamstead, author of the Kiya Trilogy.

Branded gets straight to the action. We start at Ali's brother's wedding, when a group of terrorists invade, slaughtering many of the wedding guests, including Ali's parents. Ali flees with her brother, sister, and new sister-in-law. They soon learn that these terrorist invaders have taken over all of Australia, and plan to kill all Westerners who do not denounce Christianity. Anyone who chooses not to denounce their faith is branded with the sign of the Cross, and then killed.

The story starts with action and doesn't let up. There is never a dull moment, or lagging scene, and Katie puts her characters through all kinds of hell. One of my favorite things about the story was Ali. She is the perfect heroine--brave, committed to her beliefs and her family, and doesn't give up no matter how horrible things get. She is determined to survive and thrive.

I'm certainly no expert on world politics, but I found the premise a to be a little over-the-top and hard to believe, which is why I give it four stars instead of five.

All in all, strong writing, well crafted plot, and a strong and likable main character.

a Rafflecopter giveaway
Posted by Sharon Bayliss at 8:00 AM 2 comments: 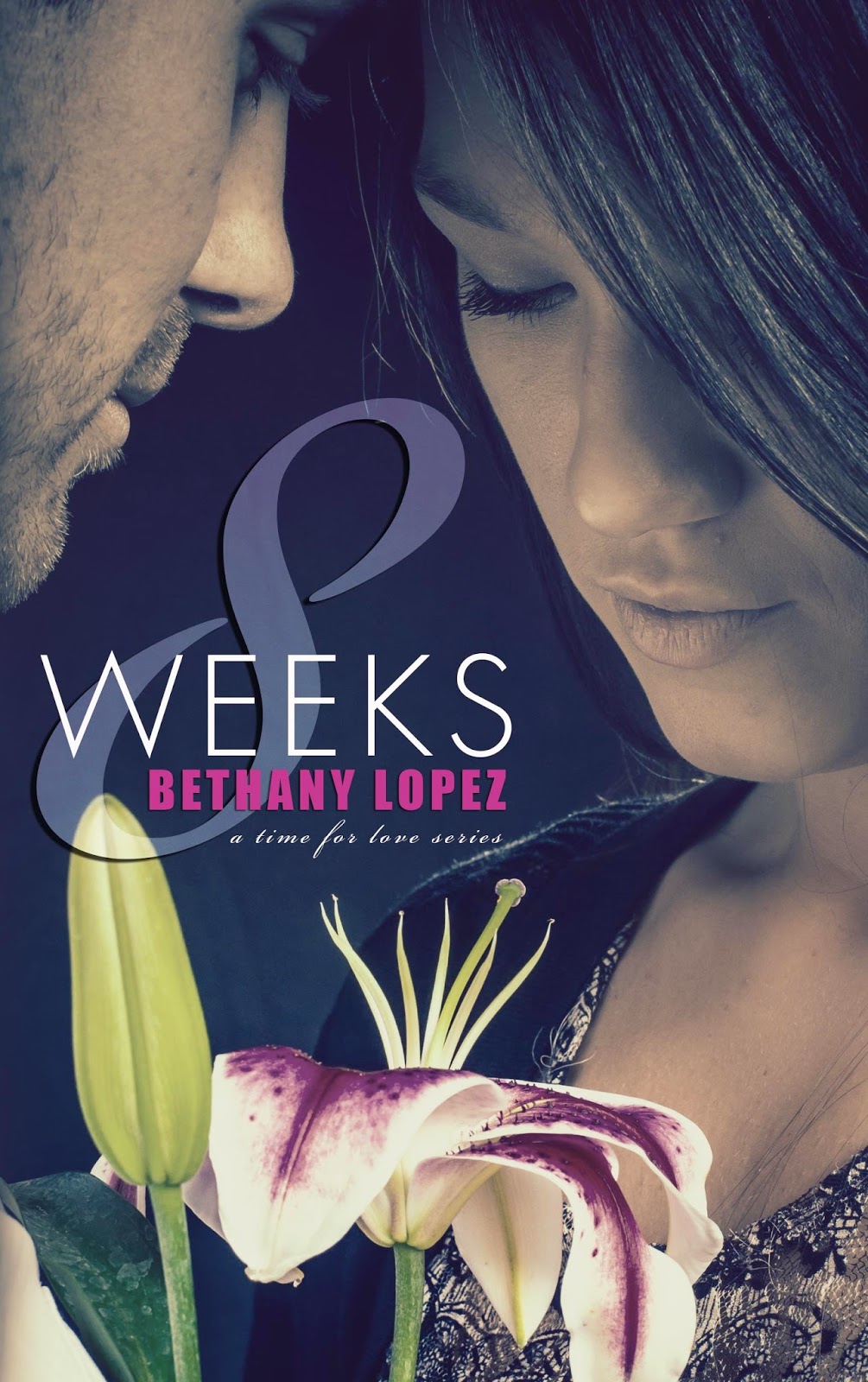 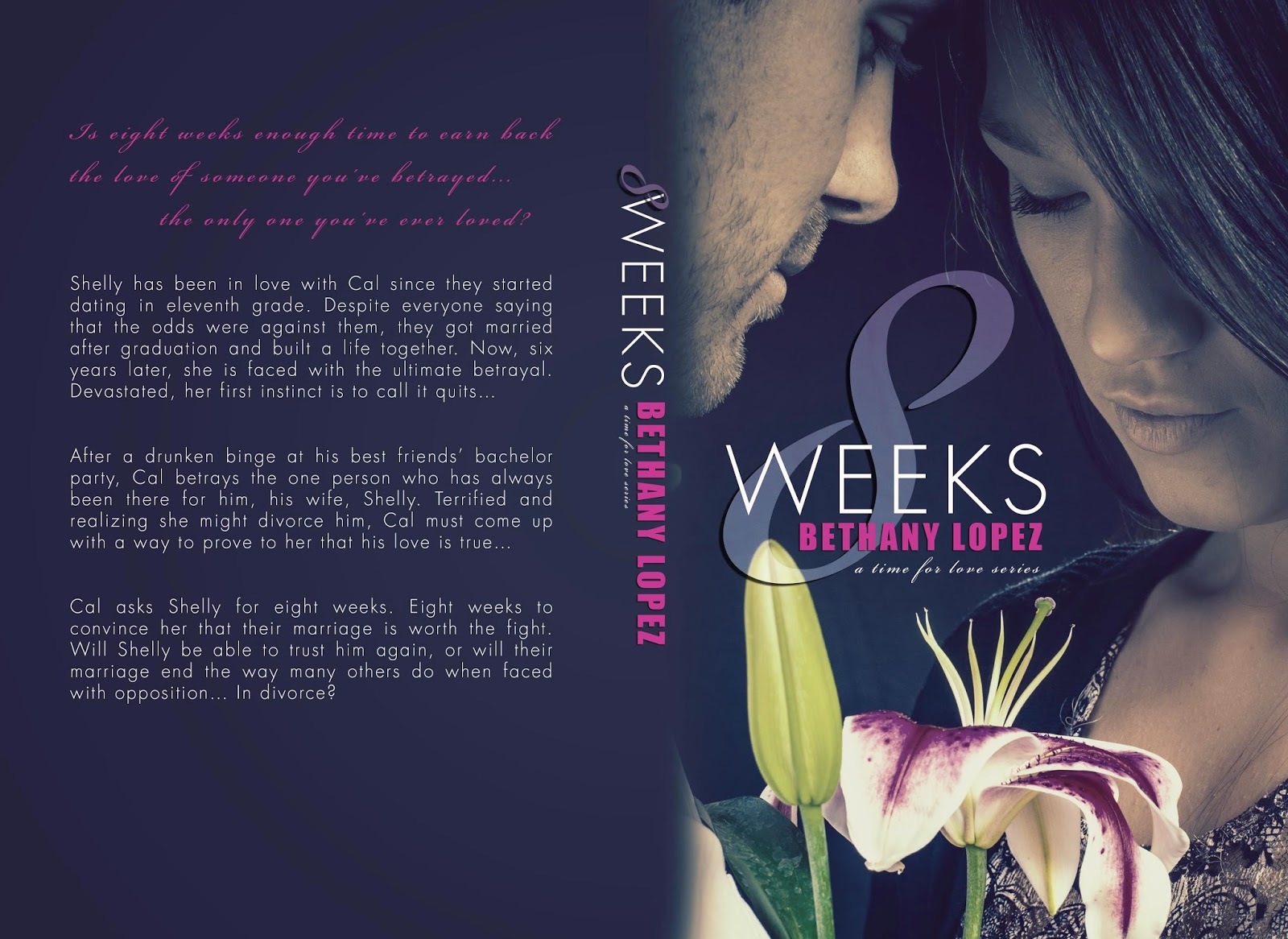 Title: 8 Weeks
Author: Bethany Lopez
Publication Date: March 24, 2014
Summary: Is eight weeks enough time to earn back the love of someone you've betrayed...the only one you've ever loved?

Shelly has been in love with Cal since they started dating in eleventh grade. Despite everyone saying that the odds were against them, they got married after graduation and built a life together. Now, six years later, she is faced with the ultimate betrayal. Devastated, her first instinct is to call it quits…

After a drunken binge at his best friends’ bachelor party, Cal betrays the one person who has always been there for him, his wife, Shelly. Terrified and realizing she might divorce him, Cal must come up with a way to prove to her that his love is true…

Cal asks Shelly for eight weeks. Eight weeks to convince her that their marriage is worth the fight. Will Shelly be able to trust him again, or will their marriage end the way many others do when faced with opposition… In divorce?

About Bethany Lopez: Award-Winning Author Bethany Lopez began self-publishing in June 2011. Since then she has published various YA and NA books. She is a lover of romance, family, and friends, and enjoys incorporating those things in what she writes. When she isn't reading or writing, she loves spending time with her husband and children, traveling whenever possible.

a Rafflecopter giveaway
Posted by Sharon Bayliss at 12:01 AM 1 comment:

Cover Reveal for Kiya: Rise of a New Dynasty

In just a few more days (2/25/14), you'll get to read the finale of the Kiya series, Rise of a New Dynasty by Katie Hamstead! This New Adult Historical Romance series has been tearing up the charts. If you haven't checked it out yet, start with book one--Kiya: Hope of the Pharaoh 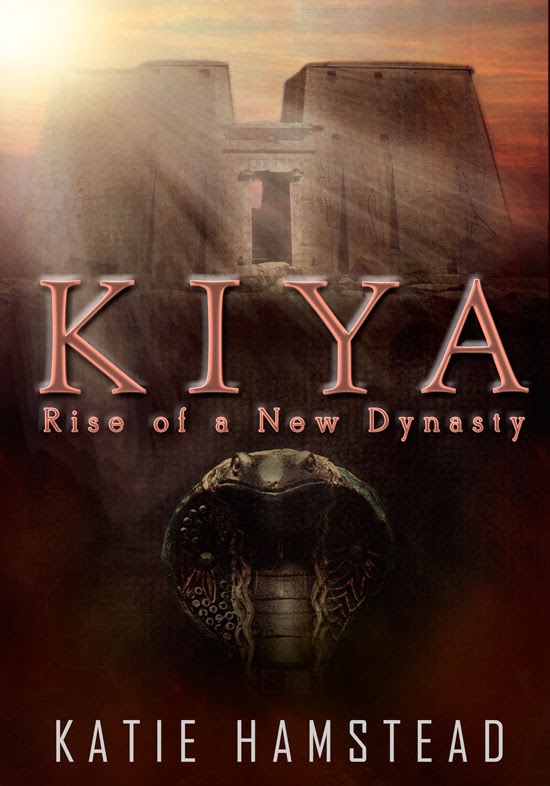 Blurb:
Tut has grown into his position as Pharaoh, but he is a wild young man. Naomi fears for him, not only because of his recklessness, but because he has put his trust in Ay–the man determined to destroy Naomi—despite her and Horemheb advising against it.
Meanwhile, death and slavery hang over Naomi and her family. With fear of the booming Hebrew numbers causing talk of enslaving them, conscription is reinstated and Naomi fears for the lives of her other children. Especially since Ay's children are now adults, and just as dangerous as their father. They threaten to take Itani, conspire against Tut, and push for power.
But Tut is in trouble. While Ay's daughter draws Horemheb's attention, and Naomi deals with the struggles of her family, everyone's distraction could spell death for the young Pharaoh.
Goodreads: https://www.goodreads.com/book/show/20498841-kiya

She has a diploma in travel and tourism which helps inspire her writing. She is currently at school studying English and Creative Writing.

Katie loves to out sing her friends and family, play sports and be a good wife and mother. She now works as a Clerk with a lien company in Arizona to help support her family and her schooling. She loves to write, and takes the few spare moments in her day to work on her novels.

I've been looking forward to this one for a while. Check out the stunning cover for the upcoming YA novel, Shattered Secrets by Krystal Wade. It's coming out through Curiosity Quills Press on March 3rd!

After being kidnapped, hogtied, and stuffed in the trunk of a car, seventeen-year-old Abigail Nichols' boy problems seem unimportant.

She couldn't be more wrong.

The boy who saves her holds her heart.

Magical beings who guide human emotions are fighting an invisible war dating back to the dawn of time, and Abigail's one of them. The more she learns of her heritage, the less she wants to know. Armed with a very old, very massive book to teach them about their history, Abigail and Derick run away to a place where they think they can be safe and happy, only to have their troubles secretly hitch a ride.

Her history book is in a sharing mood, and it tells her to keep a secret of her own.

But has she put her trust in the wrong place?

And will the world survive if she has?

And, as a special bonus, check out the trailer!

I was lucky enough to get an advance copy of Edge of Oblivion, a collection of sci-fi and fantasy short stories. Even though I got an ARC, I was happy to purchase a copy as well since all the proceeds go to The Cystic Fibrosis Trust. If this anthology didn't benefit charity, it would still certainly be worth your time. It's full of all sorts of sci-fi goodness ranging from hard sci-fi, to horror, to dystopia, and even some magical realism, from a variety of talented authors.

These are the type of stories that aren't afraid to be really out there, in a good way, of course. They were bizarre, scary, twisted, and dark. It felt like it could have been a dream journal, full of all the best and most disturbing dreams.

My favorite story was Jingle, Jingle by Keri Knutson. This story creeped the hell out of me, but it was more than just a creepy story. She managed to create dimensional, believable, likable characters in the space of only a few pages, with realistic dialog that propelled the story. You cared about the characters enough to make the horror all the more frightening. I've never really considered buying and Elf on the Shelf, but now I definitely will not! If you already have one in your attic, this might not be the best story for you to read. :)

I also really enjoyed The Torch Singer by Nathan Yocum. It was strange, but beautiful. Lyrical, with dramatic imagery. All in all, a well-crafted story that stuck with me.

So, check out this awesome new anthology!
Posted by Sharon Bayliss at 12:54 AM 16 comments: