A Tribute to Fall Wizards 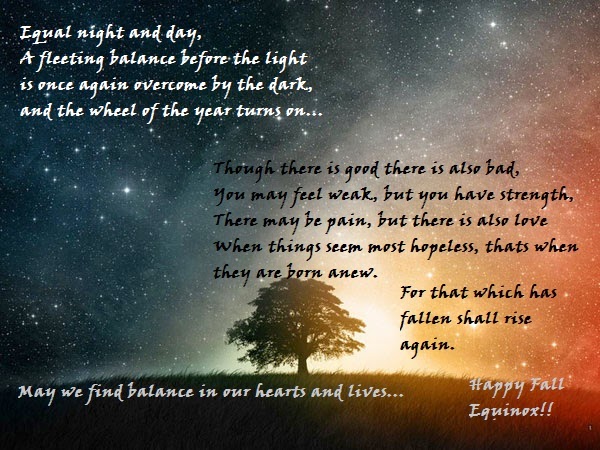 At this moment, the sun is passing over the celestial equator, and we have a perfect balance between light and dark. Happy Autumnal Equinox!!

So today, I'd like to celebrate fall wizards. Unlike the more extreme solstice wizards, equinox wizards can wield power over both dark and light. Their magic may not have as much flash and bang, but they have much greater precision. For this reason, and because of their ability to have visions or at least good instincts about the future, fall wizards can actually be the most powerful...and most dangerous.

Fall wizards are contemplative, even-tempered, rational, and diplomatic. They are excellent at preparing for the future. Like squirrels gathering nuts for the winter, they are constantly preparing for and expecting the worst. This can be a good thing and a bad thing--fall wizards are usually several steps ahead of other types of wizards, but can also suffer from anxiety and preoccupation about the future that keeps them from enjoying the present in the way that their spring counterparts can.

Fall is the gateway to darkness, so fall wizards are often pre-occupied with winter wizards in one way or another, and pay less attention to the warmer wizards in "the past." Patrick Vandergraff, the most notable...and nearly the only...fall wizard in The December People Series, is surrounded by wizards of other seasons, and knows almost no other fall wizards...at least in the first three books. :)

This loneliness may make it seem like fall wizards are solitary creatures, but that isn't really true. Fall wizards are the least common variety of wizard, perhaps simply because their excellent planning skills translate into proper use of birth control. ;) In any case, you are less likely to find them in large families of other fall wizards, but sprinkled throughout the other seasons.

Although this can make them seem like the odd one out, fall wizards thrive among other wizards. No one harvests a crop on their own. Fall is a time to gather with others and work together toward a common goal. Fall wizards can get along well with all types of other wizards, and they can also understand and appreciate the strengths of others, rarely prone to blind discrimination as other wizards sometimes are. Because of this, they are fantastic leaders. They can use and channel the powers of others into a greater goal.

Posted by Sharon Bayliss at 9:29 PM