Fall into #Fantasy Tour - The Undead: Playing for Keeps By @ElsieWriter

Week 3: The Undead: Playing for Keeps
By Elsie Elmore 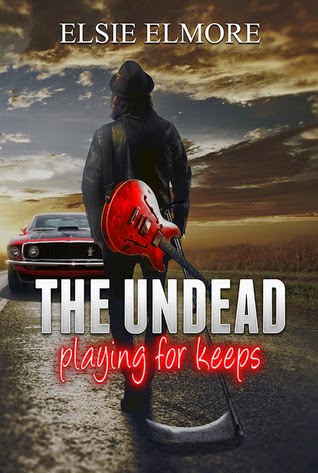 When an undead woman with serious de-comp issues stalks sixteen-year-old Lyla Grimm, her hope of rescuing her rock-bottom reputation takes a back seat. Survival definitely trumps the in-crowd.

Her corpse-following scare reeks of a major prank and coincides with the arrival of Eric. He’s the hot new guitarist in her brother’s band. But Eric’s arrival isn’t by chance. He’s a Grim Reaper dispatched to find out why Death’s clients aren’t staying down.

As Eric realizes that Lyla can wake the dead, he jockeys for control of her gift. His uncanny way of appearing when she needs him most earns her reluctant admiration. But the closer he gets to Lyla, the less sure he is of his plan. The dead are easier to deal with than living emotions.

Add it to Goodreads
Or buy your copy here: Amazon  Barnes & Noble

Elsie Elmore lives in North Carolina with her husband and two kids.

With a science education degree, she never imagined she would someday write stories that challenge the laws of nature. She loves the color red, has an appreciation for chocolate and coffee that borders on obsession, and wishes fall temperatures would linger year round.

Elsie is a member of several writing organizations: RWA, SCBWI, and WSW. The Undead : Playing for Keeps is her debut novel. Find her on the web: on twitter at @ElsieWriter, her blog at elsieelmore.com, or on Facebook at www.facebook.com/elsieelmorewriter.