Happy release day to fellow Austinite Mark Falkin! I had the huge honor of getting my hands on a pre-release paperback of Contract City to write a blurb and review. Thank you to Mark and Bancroft Press for the opportunity to have a first look. 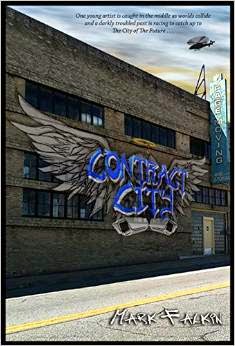 Contract City is an intelligent YA dystopian set in the country's first fully privatized city, Tulsa, Oklahoma. I use the term "dystopian," lightly because the world Falkin created is so realistic, that the story balances right on the edge between sci-fi and reality. Set in the very near future, Tulsa has become the first city to become completely privatized, with services such as police, hospitals, and schools run by private corporations. But more is going on than what meets the eye. Sara, a teenage documentary film-maker, begins investigating some graffiti that shows up everywhere--the tag WH2RR??. What starts as an interesting documentary subject to help her break into the film scene, becomes a deeper and darker mystery, and soon she is hunted by the private police squad as they try to obtain her footage.


Contract City strikes the perfect balance between intelligent and action-packed. The world, the characters, and the story are smart and timely, but that doesn't stop Falkin from creating a fast-paced and exciting story. I loved that he wasn't afraid to create a dystopian that's subtle and realistic--a believable glimpse into a real, near future. But my favorite thing about the story was Sara. She's a wonderful, strong YA protagonist. The young artist is brave, clever, curious, and cares about the world around her. She is strong and vulnerable at once which makes her relatable and easy to root for. Although tackling big, real issues, she also has to navigate the challenges of youth, such as finding her place in the world and experiencing a first love. I was on her side from page one.


I believe that teens and adults alike will appreciate the intelligence and reality behind this story, and will be rooting for Sara along with me. I enjoyed drinking in every page.