Congratulations to the winner of the Best Bad Query Contest! #bestbadquery 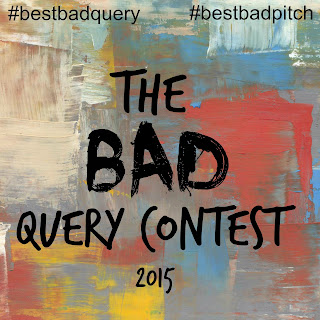 It was a tight race, but we have a winner! The best bad query of 2015 is Untitled by E.L. Wicker!! Runner up is Bromere of Flame by Courtney Sloan.

Congratulations to you both!! And thank you to everyone who played. Here is your winner and runner up. Prepare those cringe muscles.

Dear publishing people that are my favorite to such an extent that I won’t be querying anyone else!

My name is E.L. Wicker and I am the writer of a book that I haven’t titled yet, but it’s sure to be the next amazing book that gets turned into a blockbuster movie. I do have a few requests if that were to happen, like only fresh bottled water in my dressing room because I will surely star in it, but we can talk more about that later. Below is a synopsis and I think you’ll agree that it’s the best synopsis ever written.

When Ellery (she’s a girl) moves in to a swanky apartment block in the evening in Chicago where all the lights are twinkling in the sky, she expects to find that she lives alone, not that she’ll be sharing the apartment with a sexy man called Julio. With nowhere else to go she has to just suck it up. She’s very far, far away from her home in England and she’s just moved to Chicago to get away from her controlling parents who live in a posh house in Surrey, which is in the South of England only a train ride from London.

Player, Julio, plays women. He plays them all the time. When Ellery shows up he wants to have a go at her too but decides not to because they live together and that would be really awkward.

Ellery eventually gets a job, which she doesn’t like, but does it anyway because if she didn’t she wouldn’t be able to pay the rent if she didn’t work there.

Julio knows Ellery isn’t happy so sets about trying to get her a job in his firm which does some accounting for some big firm so makes decent money but not loads.

Will Julio get Ellery a job? Or will he not even though he owns the company? Or will he end up falling so truly, madly, deeply in love with her so that he prefers to have her chained to the kitchen sink making dinner for when he gets home? Will Ellery ever find a job she likes again. Or will she find love in Julio’s arms or just find him really annoying? Request my book to find out.

This book that I haven’t named yet is a cross between the music video for Hero by Enrique Iglasis pre mole removal, and Bridgette Jones diary, but I feel I have to say it is neither a music video or a diary book, although we could try to flog it as a memoir because it’s based on a friend of a friends niece’s best friends sister and I’m sure she wouldn’t mind.

In case you need it, which I’m sure you don’t, below is my pitch.

Pitch: Ellery moves to Chicago. Julio tries to get her a job. They both like grapes. They fall in love.

Anyway, I’m sure I’ll be hearing from you soon. You can contact me on this email address and I’ll respond promptly. Oh, I feel I should add that I’ve only written 10k words so far but it’s going to be so good and I can write it so fast that it really doesn’t matter.

Dear Mr &/or Mrs who want to publish the next AWESOME book,

I’m not kidding. I’m really good at writing and have spent the last month punching out this bad boy. I’ve shown it to my 3 best friends who also write good and they have told me over and over and over that it is the most awesome thing they’ve ever read. My mother said the same thing when I told her I’d written a book. She said she always new that I would be a New York Author 1 day. Even when I was like 3 she knew it. I even have like 12 followers on fanfiction.net so you know that marketing for me is already like totally taken care of. All you got to do is buy this and then we will both be so rich no one will believe it.

So here’s the awesome pitch. Be ready to have your sock blown off.

My story is about this guy, Bromere, who is really tough and super awesome at everything. I mean everything. He can fight bears and sing and fix things and is totally awesome with the ladies. And there’s this other guy, Lousarius, who is super jealous of him and tries all these things to take his treasure and his girl. Oh yeah, they are pirates, you need to know that for the treasure to make sense. Well, No matter what this other dude does, my dude beats him and gets the girl and is awesome at everything. Oh and there’s Bromeres friends, Dudeacleese and Testacleese, who are there trying to do the stuff Bromere does, but they never can be as awesome as him. And there’s also stuff about explosions and aliens, but I couldn’t quite make that go anywhere, but it’s fun anyway. And in the end, Bromere saves the President from 2012 fires and acid rain, so there’s this whole environmental story in there as well.

So, yeah, that’s the story. Oh, it’s called Bromere of Flame and it’s a complete novel ready for you, with just an little bit more work needed (seriously just like a chapter or two more, I think I need to do something more with this aliens, at 29,366 words!!! This awesomeness’s genre is a greek, western, sci-fi, fantasy, horror, pirate, erotica, political thriller. I know that my pitch is over 35 words but it was too mind-blowing to put in only 35 words. I knew once you read it you wouldn’t mind. So send me back the contract and let’s get this money train rolling.